Jailed doctor Kafeel Khan writes a letter describing the conditions in the overcrowded Mathura jail. When the capacity of Mathura jail is 534, there are 1600 prisoners lodged in the jail, forget social distancing, writes Dr Kafeel Khan. Dr Kafeel’s letter points out how one day in the overcrowded and unhygienic jail is endured. Read his letter here,

“At five in the morning, sleep breaks in jail warden’s voice, “get up and form pairs”, for counting. After counting everyone rushes to toilet/washroom- there are 1600 prisoners in a jail with the capacity of 534 prisoners. On each barrack there are 125 to 150 prisoners and four to five toilets. You have to stand in line to use the toilet, and hope for the one inside to get out, how many times I myself cleaned my shit. By the time my turn comes, my stomach starts aching, finally by the time I enter the toilet which is full of flies and mosquitoes, even before shitting I vomited a lot of times. Somehow, chase away these flies and mosquitoes and somehow run out of it. Then wash hands very well, brush teeth and stand in the line to take bath, in half an hour my number comes. I wash clothes and then take bath. Between 7:30 to 8:00, I get breakfast. 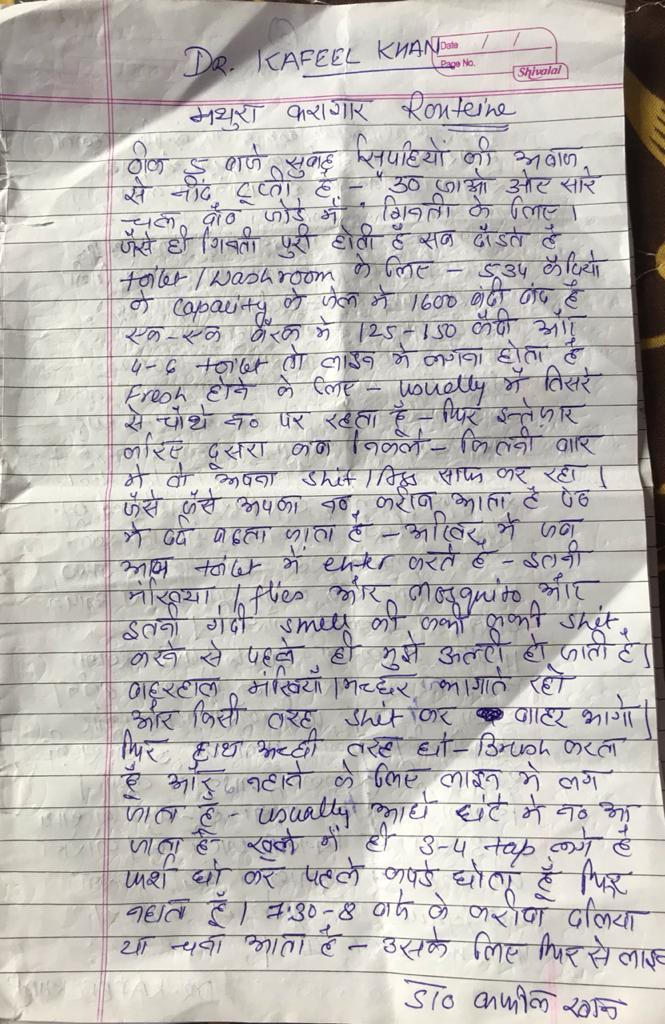 Standing in the line, in this temperature the entire clothes get soaked in sweat. Then in whatever space I got, I make a bed to sit with the blanket and sit down. It is very much crowded. Forget social distancing. Mosquitoes and flies fly around you if you don’t chase them away, they will stick on to your body.

Around 11 is the time for lunch. You have to stand in the line with your plate to get watery daal, cauliflower/ radish etc sabji, for roti you have to stand in another line. Go for it, because you have to live- around 3 rotis you can have along with water. Meeting visitors is suspended because of Corona, or else you would be able to receive fruits and with that you can fill up your stomach. 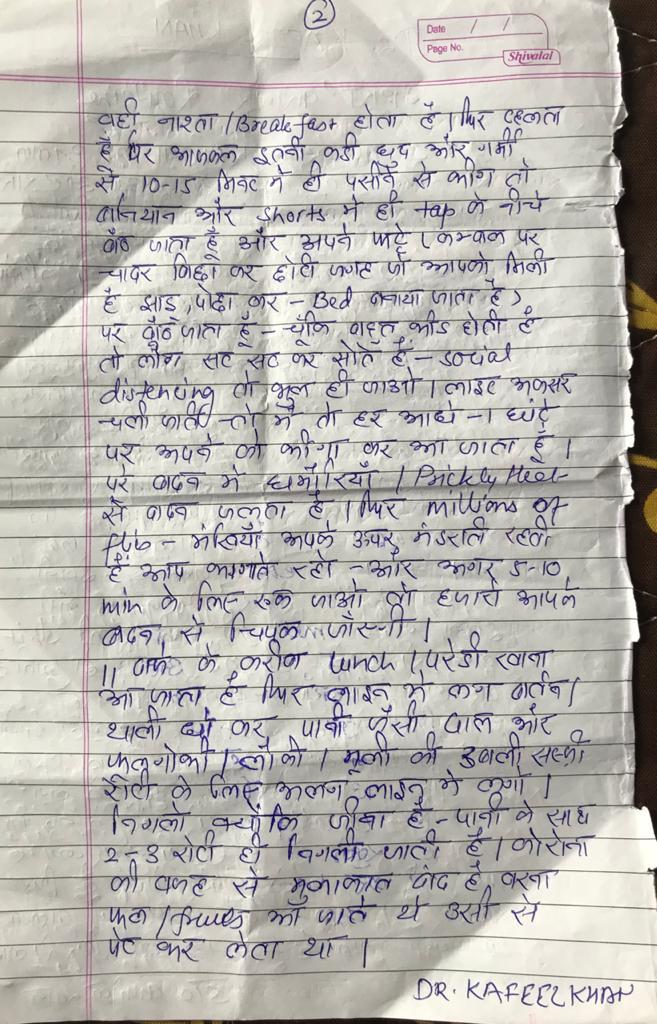 By 12, barrack get closed again. For the next three hours, barrack’s hot air get filled with the smell of sweat and urine. I try to read but it is too much of suffocation. I drink a lot of water. On 3:00 pm barrack gets open again, everyone runs out of it but 45 degrees of heat will not allow you to stay out. Counting minute by minute I stand in the shade of the wall. I give Zuhr namaz after taking bath. Around 5, the dinner arrives, the same roti and curry, somehow you can have it and keep your stomach at peace. By 6, barrack gets closed. There will be a rush to take bath, but 10-10 people try to take bath together. 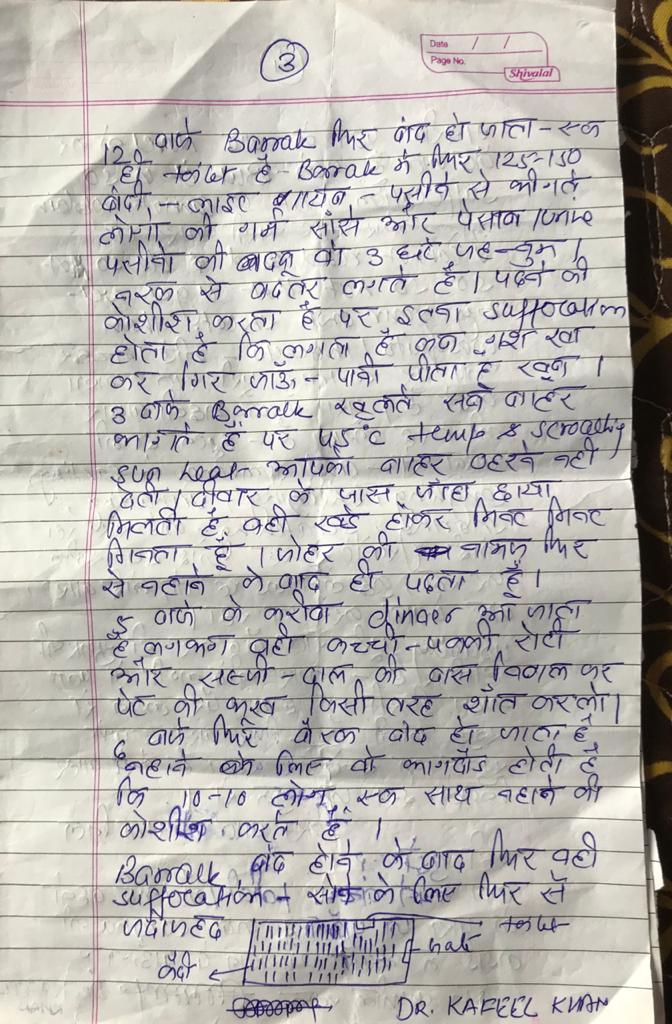 After the barrack closure, the same suffocation continues. After offering Magrib prayer, I sit trying to read a novel but I can’t because of the suffocation, I can’t explain the extent of it. If light goes off, don’t expect to read and you get wet by your own sweat. The barrack starts smelling like a fish market. By night it gets unclear whose hand and whose leg is on whom. Someone coughing, someone farting, some of them fighting, some go to urinate again and again. I sit waiting for morning 5 AM, and think how to get out of this hell. What is the reason for which I am being punished? When will I be able to go and meet my kids, wife, mother, brothers and sisters? When will I be able to assure my service to fight CoVID19? 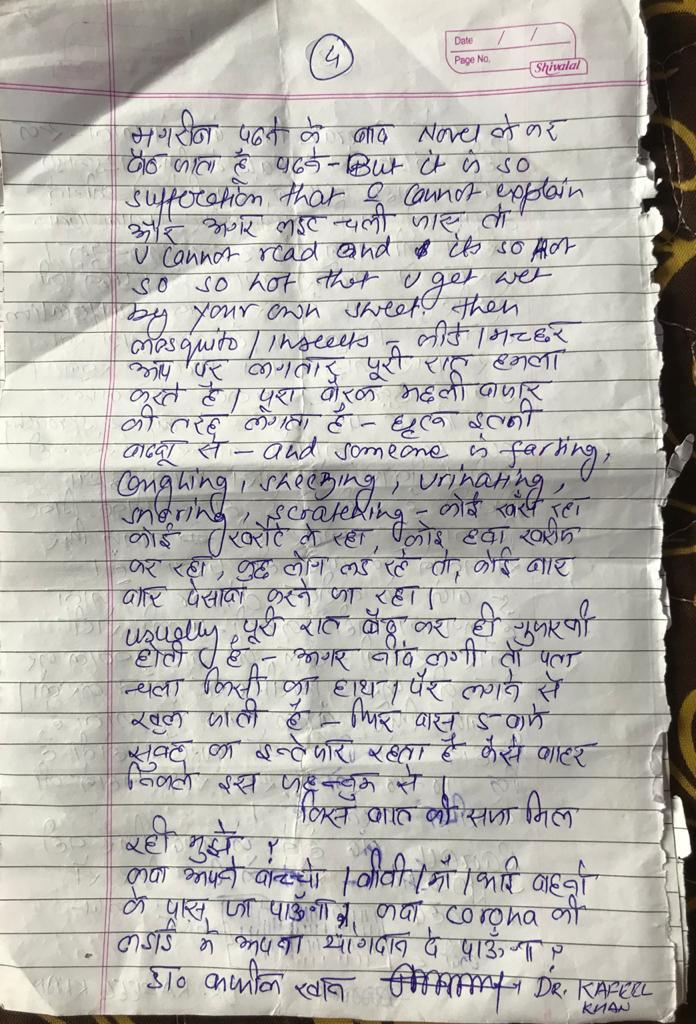 At the onset of CoVID19 outbreak Dr Kafeel had appealed the government to release him and allow him to provide service to fight CoVID19. He has already written several letters, including one to the prime minister, suggesting directions for better infrastructure for CoVID19 containing. He was seeking his own release to be at service during the pandemic.

Dr Kafeel has been booked under National Security Act on January 29th night on his way to an anti-CAA protest in Kerala. Charges against Dr Kafeel Khan are based on the speech he made at an anti-CAA students protest gathering at Aligarh Muslim University. Even after he was granted bail by Allahabad high court on the case with section 153A, jail authorities kept him in illegal custody for more days and charged NSA on him. Dr Khan was denied parole which was supposed to be provided following the March 23 Supreme Court order to allow parole for prisoners for three months in the wake of CoVID19.