Rajive U hails from Kollam in kerala introduces himself as a soldier in his Facebook account. He posted a video of a female journalist accusing that she was Inji pennu the id that published a MeToo allegation against Ayyappa Dharma Sena president and right wing activist Rahul Easwar last day. The video he posted was of Mrudula Bhavani a journalist from Kerala. He had added a note along with the video saying that the woman seen in the video was Inji pennu who published Metoo revelation against Rahul Easwer. Immediately after the video was posted he put up another post urging for cyber lynching against Mrudula Bhavani. In the post Rajeev U describes the journalist ‘skelt’ and ‘filthy’. The video he posted was taken an year back at Vaikom while the journalist was there at to attend a protest against the house arrest of Hadiya a young woman who converted to Islam. She and a few other activists were attacked by RSS men. Police intervened and took the protesters to safety. The video was taken while they were being taken away in a police vehicle. Rajive U points out in his note along with video that ‘this woman who takes video from the vehicle is Inji pennu’. From other posts at his fb account it is evident the he is a friend of Rahul Easwar the accused in the latest MeToo revelation.
Rajive’s post against Mrudula Bhavani includes serious harassment against a woman. Through his posts he body shames the journalist and urges his followers and friends to carry out cyber attack against the journalist through social media. Many of his friends has also joined him with body shaming and cyber mob lynching. 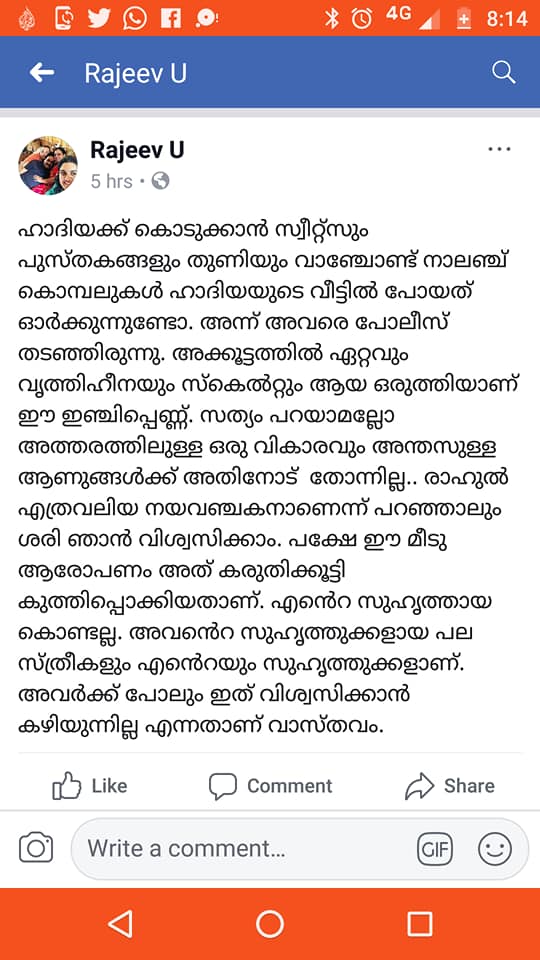 Its was on Monday morning Ini pennu published a post with MeToo revelation against Rahul Easwar. Rahul Easwar is a staunch critic of the recent verdict by Supreme Court of India that allowed entry fro women of all ages to Sabarimala temple. he was arrested for orchestrating attack agaisnst women reporters at Nilakkal who were there to report the anti women protests conducted by RSS and related organisations agsinst the court ruling. A woman anonymously revealed through Injippennu that she had been sexually abused by Rahul Easwar a few years back at his apartment. She befriended him while he was a presenter at a TV channel. Rahul Easwar invited her to his house assuring her that his mother would be present at his flat.

screen shot of the MeToo revelation below 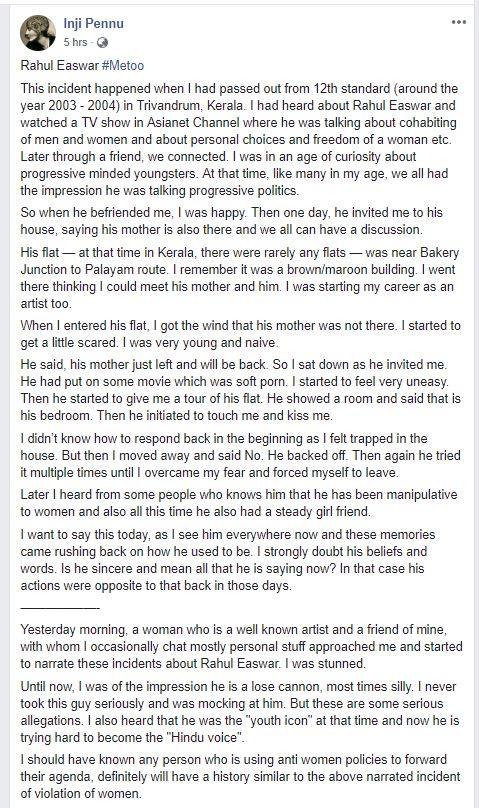