Three Aligarh Muslim University students who were protesting against the vice chancellor Tariq Mansoor are detained by University’s security officials and handed over to police. Mujtaba Faraz, Tahir Azmi, and Sidharth Gulati were picked up from the protests for sloganeering “VC go back” while he was to attend the Republic day ceremony. As informed by a student from AMU, these students were sloganeering against the vice chancellor Tariq Mansoor when he began his speech. Students who ally with the vice chancellor and few armed outsiders infiltrated the protesting crowd and created a scene. A gang of masked goons with iron rods moving around can be seen in a video recorded by a student.

The students were informed that they are taken to civil lines police station. By the time they tried to meet them there, the police shifted them to another location. Currently the students do not know where these detained students are. There is no information about whether an FIR is filed. 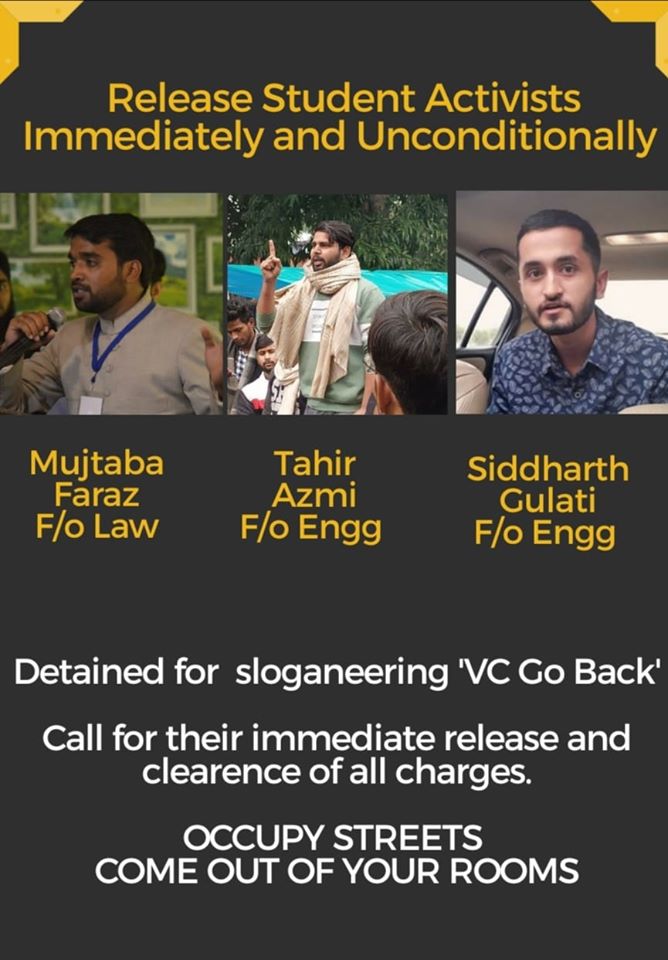 The protesting students demand resignation of the vice chancellor and registrar, for allowing the forces enter the campus on December 19th. The students were expressing solidarity with Jamia Milia Islamia students in the night of police repression in the campus. The vice chancellor had recently demanded the district administration to provide him with more armed security.

Protesting students of AMU are encountered with fabricated cases and unnamed FIR. Yesterday, the house of Sharjeel Usmani, student leader and a former student of AMU was raided by UP police. Sharjeel and four other students were charged with goonda act few weeks before.