Bashir Ahmed Khan’s three years old grandchild Ayad, who had been the close witness to the killing tells that his grandfather was shot dead by forces. In a video surfaced on twitter, the child can be seen imitating gun shots and telling how he was killed.

Listen carefully what he is saying. Still you need any proof?#KashmirBleeds
#Kashmir pic.twitter.com/Zs5LQqJhFp

“Grandfather was with you in the early morning?”

“What has been done to him?”

“They shot him and he was killed”

Bashir Ahmed Khan, the sixty five years old Srinagar resident who was out along with his grandchild, was dragged out from car and was shot dead by CRPF personnel as per witness accounts his family and relatives say, Kashmir Walla reports. The CRPF and police claim Bashir Ahmed who died is a usual casualty of cross firing, during armed encounter with militants. Lately, his three years old grandchild Hayat was seen sitting on his grandfather’s chest, and was rescued’ by forces. One CRPF trooper is killed and three others are injured during the encounter.

“Kill the one who shot dead my father, imagine the plight of my three-year-old son, what he must be going through? They didn’t even take into consideration that a minor was with him,” Bashir’s daughter says.

Photos of Bashir and his grandchild sitting on his chest evoked enraged questions regarding war crimes in Indian administered Kashmir and its brutal patterns. Who took the photos and circulated it to media is still unclear.

Similar killing happened in Kashmir a month and few days back when a 23 years old young man was shot and killed at an army check post in Srinagar Gulmarg highway. On May 13, Peer Mehrajuddin was driving his car to work with his relative. The CRPF claimed that Mehrajuddin was trying to escape the checking. His relative, Ghulam Hassn who is a witness told the media that the car was not moving when the firing happened.

How Indian media reported the killing?

Most of the Indian media outlets carried the ‘killing of a civilian’ as a cross firing casualty. India’s prominent news agency Asian News International carried a story on how CoBRA commando Pawan Kumar Chaubey carried out the rescue operation of the three years old who was seen sitting on his grandfather’s dead body. Army personnel Pawan Kumar Chaubey is from Uttarpradesh who, according to a senior CRPF official had “performed well in anti-Naxal battalion” and is “transferred to another conflict zone”. The report also mentions this incident as a case of “targeting of militants on children and civilian”.

“When we reached the site, what we saw was disturbing. Our priority was to evacuate the child. It was very challenging as terrorists were firing upon us. The child was going to Handwara with his grandfather” Azim Khan SHO Sopore, Jammu and Kashmir ANI.” Another input by ANI appeared in the news papers next day, along with the photo of SHO Sopore carrying the child.

These are few reports that say Bashir was killed by gunshots by militants. As per these reports he reached the spot of encounter stopped the car and started running with his grandchild.

“During the run the militants fired at them. He fell after being shot. The scared child sat close to him. Without knowing his grandfather is dead the child sat on his chest. There were bloodstains on his shirt. He didn’t cry then, he was numb. It was when a CRPF personnel called the child, in between the firing the child walked towards him. the child only cried after he was carried in the hands of CRPF personnel Pawan Kumar Chaubey and taken to the army vehicle”, reads the report. 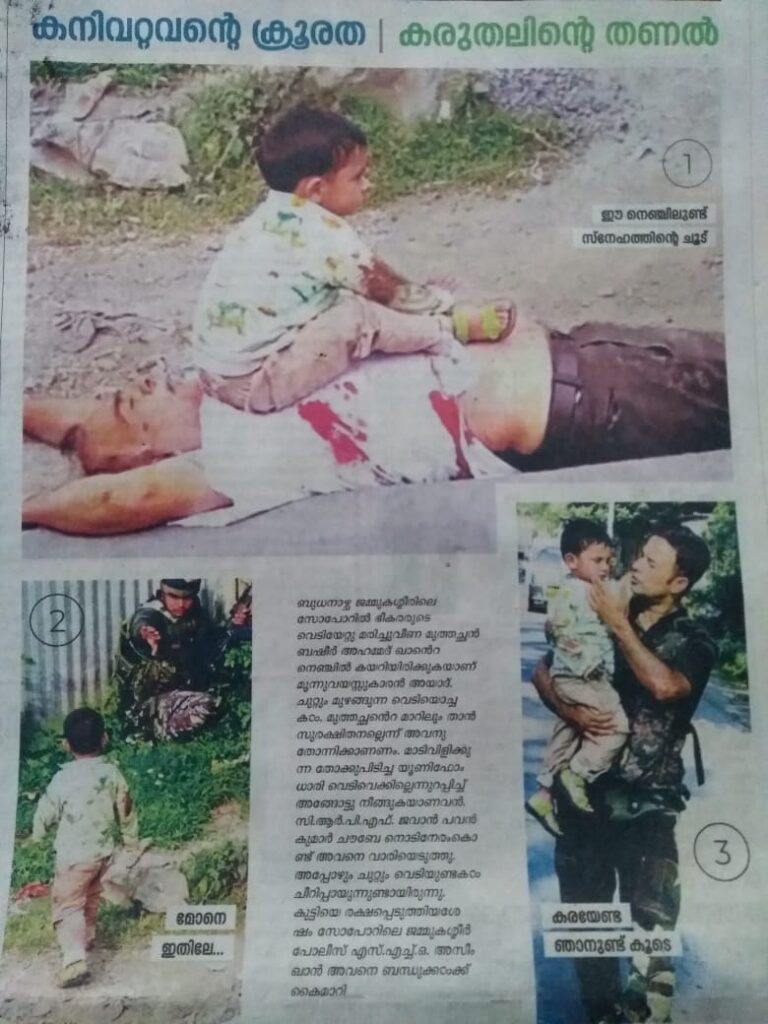 Bashir Ahmed’s brother Nazir Ahmed told journalists that if it was cross firing why is his car is unbroken. This is when witness accounts and Bashir Ahmed’s family say that Bashir Ahmed was killed by being dragged out of his car and shot from behind. The rescue operation of CRPF and the police is highlighted in these reports.