JNU PhD scholar Sharjeel Imam, who is one of the key organizers of Shaheen Bagh sit in protest against Citizenship Amendment Act tested CoVID19 positive. Sharjeel Imam is imprisoned in Guwahati central jail where 95% of prisoners are CoVID19 positive, as claimed by a prisoner. The fact that prisoners are not being tested, isolated or treated has raised huge questions about ongoing CoVID spread in various Indian jails.

“My brother tested corona positive. He needs to be shifted to hospital soon. Around 600 inmates are CoVID positive, they are not shifting any patient to the hospital. Only two patients had been taken out from the jail. We are filing an application for his transfer to hospital, I hope he will be transferred as early as possible” told Sharjeel Imam’s younger brother Muzzammil Imam. The jail contain 1200 prisoners, which is built with space for 1000 prisoners.

Sharjeel himself had informed about the alarming condition in the overcrowded jail and called for better treatment for CoVID19 affected prisoners. “My brother Sharjeel Imam informed me that the situation in the jail is worrisome. The jail administration is trying its best to keep the CoVID positive persons away from the others but lack of infrastructure is making it difficult. He wants better facilities for all the inmates and lesser discrimination from the district administration towards prisoners as they too are citizens” wrote his brother Muzzammil Imam, six days ago on facebook.

In the second week of July, Krishak Mukthi Sangram Samiti leader Akhil Gogoi had tested positive for CoVID19 and had been shifted to hospital. Fifty five inmates too were tested positive. On July 11th, the jail was declared as containment zone. Later, a political prisoner named Dudul Das who set fire in the room to be taken to the hospital informed that around 95% of the prisoners are affected by the virus. The prisoner had left a note informing this on his way to the hospital. His letter informed that all the inmates were not tested and jail authorities are not taking up the situation under control, the prisoners are denied of treatment and diet. The letter said that both CoVID positive and negative prisoners are mixed and fifty of them are made to sleep in a room without zero chance for social distancing. The letter ended with a note in English, “PLEASE SAVE US WE ARE ALSO HUMAN BEING NOT GHOST” 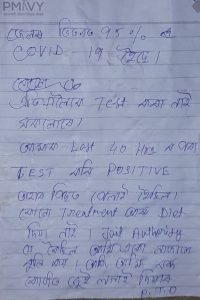 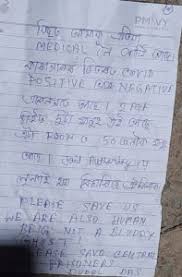 On June 25 and 26, prisoners including Sharjeel Imam organized hunger strike with eight demands, which included fair CoVID19 screening inside the jail and while enrolling new prisoners, release of undertrial prisoners including Akhil Gogoi, allowance of visitors, especially lawyers and family members to meet the inmates following CoVID19 guideline, increase in telephone conversation time with lawyers and relatives, supply clean drinking water, provide quality food etc. On July 16, Assam health minister Himanta Biswa Sarma had tweeted that along with other officials he visited the jail premises and reviewed the facilities. Still, the demands made by the prisoners are yet to be met.

Sharjeel Imam surrendered to the Assam police on January 28 this year, after he was charged with multiple FIRs at different states against his speech on widening the protests against the Citizenship Amendment Act. Charges against him are UAPA and sedition. Sharjeel had called for organized protests in order to pressurize the government, and suggested road blockade to Assam where NRC is already implemented as an effective means of protest in his speech at Aligarh Muslim University in December 2019.

Targeted campaigns initiated by Republic TV lead to the framing of this young leader. Sharjeel Imam was also made an accused in the student protest held in Jamia Milia Islamia on December 15, 2019 alleging his speech incited violence. On July 10, Delhi High Court rejected Sharjeel Imam’s bail plea challenging the trial court order that allowed more time for Delhi police to complete investigation against him for offences under Unlawful Activities Prevention Act. The Delhi police special cell team that reached Assam on July 17 to take custody of Sharjeel Imam has now decided to delay his transfer.