On Sunday, Some 16 kilometers away from summer Capital of Jammu and Kashmir, Srinagar, a driver of a pickup truck is pleading in front of a paramilitary trooper at an intersection in Southern Kashmir’s Pampore Town, to allow him to continue his journey on the Srinagar- Jammu national highway. The driver’s pleas seemed to have fallen on deaf ears as the officer disallowed him to move further. Disgruntled by the attitude of the trooper the driver turned his vehicle back. After covering a few meters from the check point, a group of women, who have possibly taken a lift in the truck owing to  thin public transport, looked towards the cop with stern face and shouted in unison, “ ye gove zulm( this is sheer oppression) dafa koun che gasan kashir manz( why do not you get lost from our land)”. 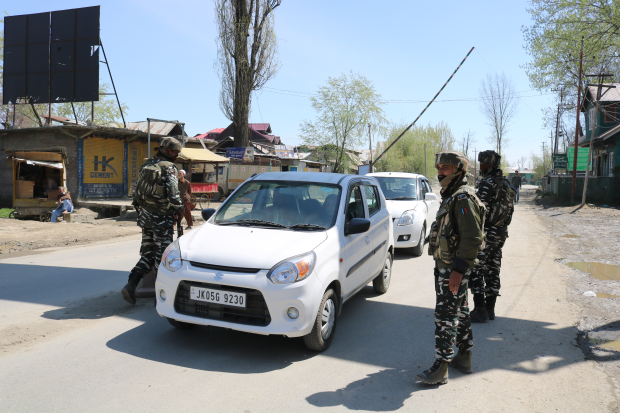 Such scenes were witnessed across the valley  on Sunday, as hundreds of armed forces carrying lathis and rifles along the highway and intersections, were seen restricting the civilian movement on the highway following a government order to close it to civilians for two days every week. 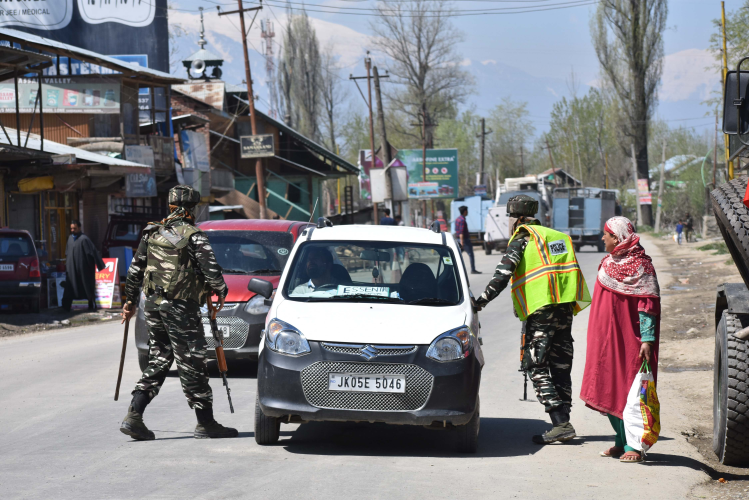 As per government order that it issued on  April 3, the ban was imposed to “ensure the safety of security forces” on the national highway during parliamentary elections and to minimize the chances of any suicide attack on security forces convoys. “In view of the prevailing security situation- Pulwama attack and another car bomb attack on the security forces convoy at Banihal and substantial movement of the security during the parliamentary elections, there is an immediate need to regulate the traffic movement on the highways,” the order said.  The ban will be implemented every week on Sundays and Wednesdays, when there would be no civilian traffic on National Highway, “ from Baramulla through Sinagar, Qazigund, Jwahar Tunnel, Banihal, and Ramban till Uhampur from 4 Am to T Pm,” the order said. 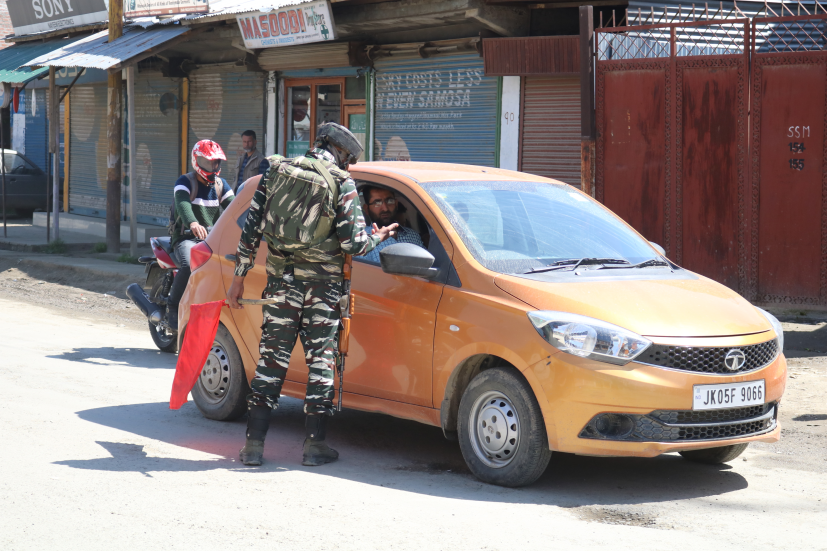 Sajid and his sister Fiza walked nearly two kilometers and changed three buses to reach their examination centre at Delhi Public School located on the outskirts of the Srinagar, “We left around 8am in the morning, walked two kilometers on foot from HMT to Parimpora. Then, changed three buses to reach to our examination centre,” Sajid said, “this were all because of the closing of the highway. It would have taken us half the time to reach to the centre if highway was not closed.”  He, however, asked what kind government would let students suffer, “what kind of order is this which prohibits students to appear in examinations. Nowhere in the world would you see students being treated this way. It proves we have no future with this country,” Sajid said.

Another resident from North Kashmir’s Kupwara, Abdul Gani Malik lamented that despite being suffering from a life threatening disease he was disallowed to go home, “for last three months I was in Chandigarh for treatment and reached Jammu last week. I was stuck on the highway for four days.  Today I reached here but forces are stopping me  at different places and not allowing me to move.  Why are they stopping an ailing man to reach his home,” he said. 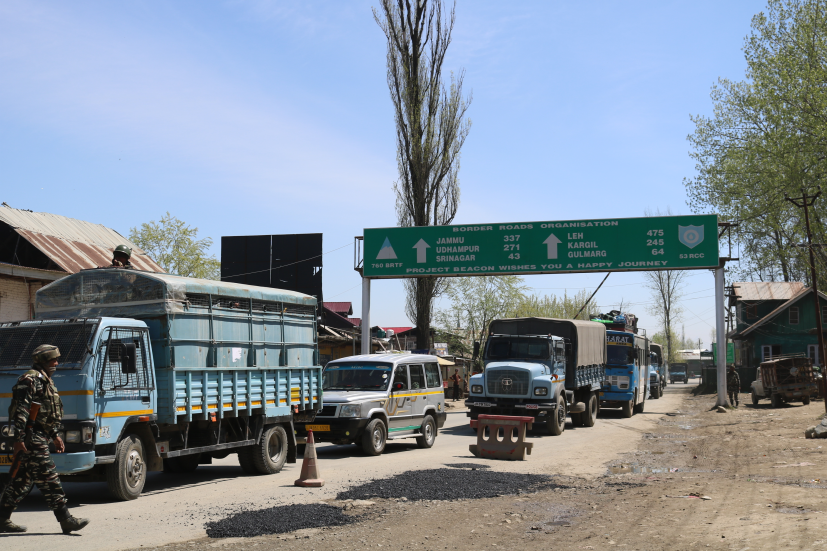 Political parties protest against the ban

On Sunday, the members of both People’s Democratic Party and National Conference tried to defy the order by marching towards the highway. While terming the ban order “mindless and colonial senior national conference party leaders staged strong demonstration at different interjections leading to the highway. “Driving to Uri I am getting to see firsthand the extend of disruption and inconvenience that is being caused to people because of the mindless closure order that is in place,” former Chief Minister Omar Abdullah tweeted on Sunday.

His father and presidents of National conference asked whether Kashmir is a colony or a part of a free country. “Is Kashmir a colony or party of a free country? The order sounds dictatorial,” he told reports during a protests demonstration in Srinagar on Sunday.  He suggested that government should use train service for the movement of security forces personnel or move them during night without inflicting sufferings on the people,” he said.

Former Chief Minister, Mehbooba Mufti, asked people to defy the ban and move freely. She said that Kahsmir belongs to kahsmiris and their roads are for kashmiris. “The GOI should stop these suppressive tactics. They are not an occupational force here but this ban will not be tolerated. I cannot see my people suffering like this. On the way I saw people young and old walking along highway,” she said.

Calling it dictatorial move on twitter Mirwaiz Umar Farooq, chairman of Hurriyat Conference urged the government to withdraw this diktat and stop punishing people of Kashmir. Some compared the ban with the Israel who often restrict the movement of Palestinians and are often accused of economic strangulation of Gaza. “This is Kashmir, not Palestine; we won’t allow you to turn our beloved land into prison,”Mehbooba Mufti said. Others have drawn equivalence with the Nazi treatment of Jews during the Third Reich. “What used to happen in Hitler’s Germany is happening in Kashmir in the 21ist century,” Gowher Geelani, a Kashmiri journalist wrote on Twitter on Sunday.

Disastrous consequences for the economy of state

A vegetable vendor on the Highway near Bibihara in South Kashmir said that the ban will leave him jobless, “It will affect our livelihood.  The entire road is deserted due to lack of civilian movement. Who will come to buy my vegetables? The markets are being shut down. Our vegetables will rot till evening. We have to throw it away in the evening if customers did not take it. We request government to lift this ban so that we are able to do our business,” he said. 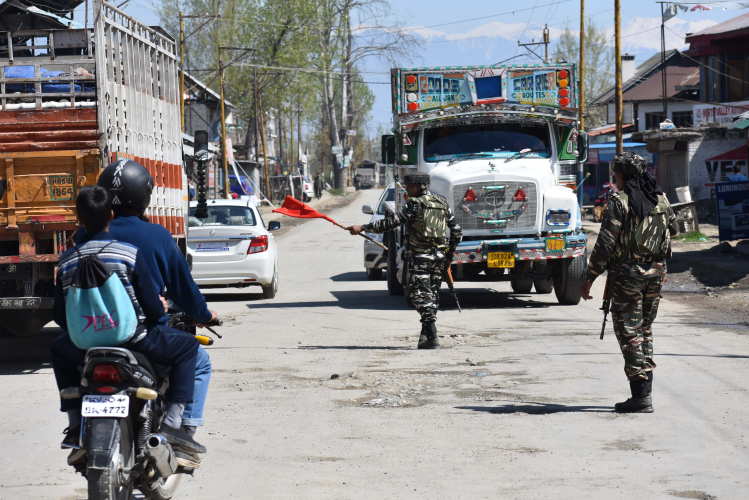 The Kashmir chamber of commerce and Industry also castigated the order, saying that the move would put the whole population to “unimaginable inconvenience” and will have “disastrous consequences” for the state economy. Sheik Gowher Ali,  Spokesperson of the organization,  said that the order has been issued without considering its impact on the population and indicates the government’s ignorance of local problems, “the order has come at a time when the Kashmir Chamber has been raising the issue of lack of alternative routes and means of travel to Kashmir. It does not augur well for a democratic setup and has been rightly condemned by all stakeholders,” he said. Terming it as unprecedented and alienating, he said that many elections have been held in the State and such paranoia and panic has never been witnessed. “It is unprecedented and alienating. The State needs to deal with the situation without encroaching on the rights of the public,” he said, adding that the order will also negatively impact the inflow of tourists to the State, interfere with the booking schedules and plans of tourists.

Echoing him, President Travel Agents Association of Kashmir (TAAK) Ashfaq Siddiq Dug said that the decision will not only result in heavy congestion in the rest of the days but will also increase the travel time and invite problems of commuting. “It will further add to the miseries of sick people, students, Tourists and Pilgrims. This will have serious implications on the local psyche as well as the economy of the state and reduction of tourist footfalls. Tourism remains a victim of the political uncertainties and unpredictable situations arising many a times in the valley,” he said. He added that the decision makers should keep in mind that Kashmir does not have any alternate road connectivity and closing the highway for two days will lead to a shortage of essentials.

Three petitions were Monday listed in the J&K High Court against the recent diktat of banning the Highway for civilian traffic twice a week to allow movement of armed forces’ convoys. Of them, one was filed by bureaucrat-turned-politician Shah Faisal. The other two were filed by Raja Faisal Zahoor and Shafqat Nazir. The petitions were listed before the Division Bench of Chief Justice Gita Mittal and Justice Tashi Rabstan. Issuing a notice to the government, the Court has directed the Additional Advocate General of the State to come up with instructions by tomorrow (Tuesday).