At least four militants were killed in two separate gunfights that broke out between security forces and militants in Kashmir on Thursday. 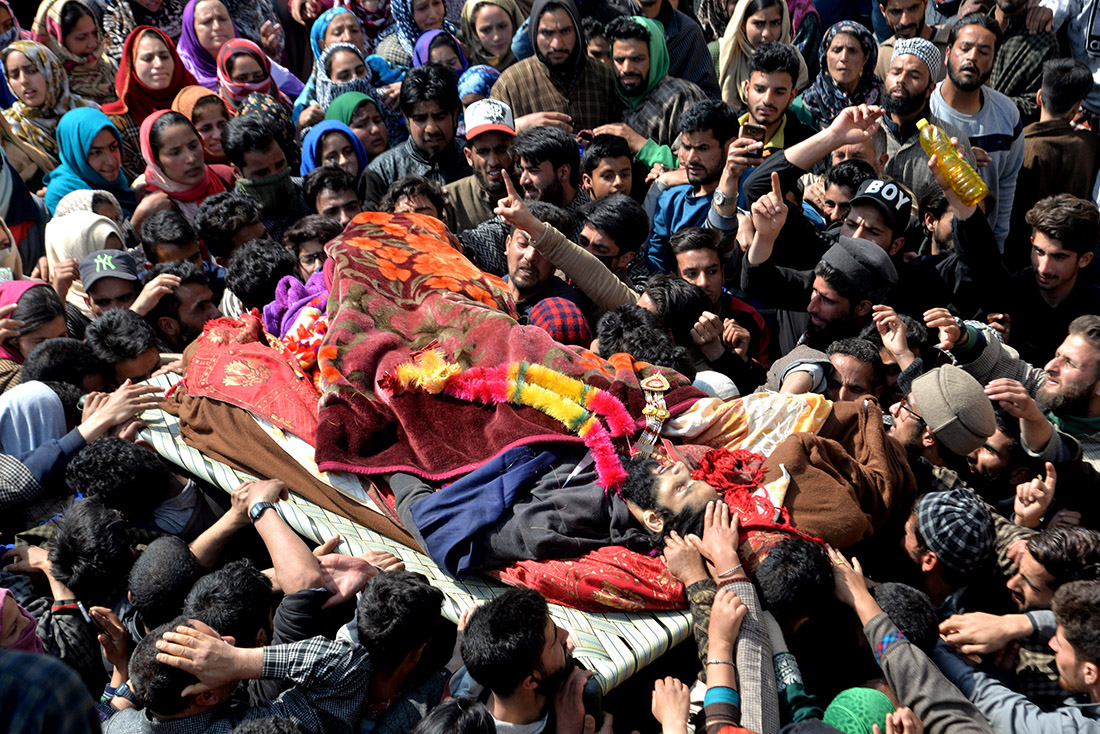 Three militants were killed in the first gunfight that took place in South Kashmir’s Shopian area while as another militant was killed in Langate area of North Kashmir. 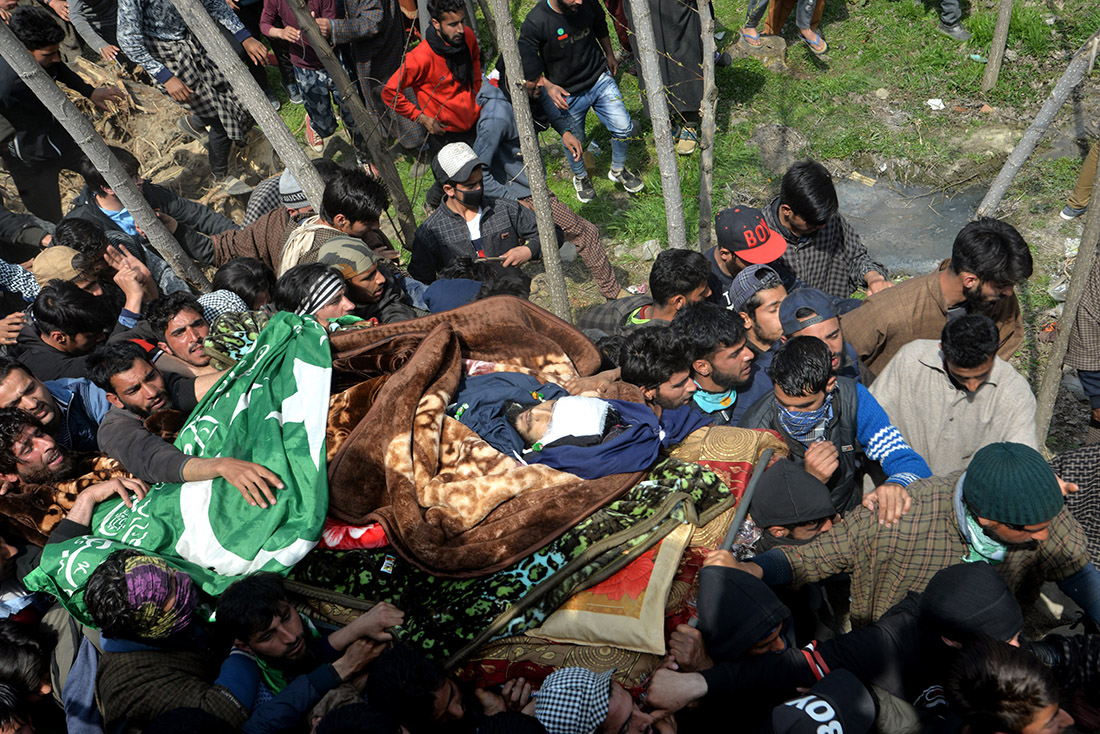 At the funeral of Aqib Ahmed

Thousands of mourners participated in the funeral of the slain militants at their native villages. 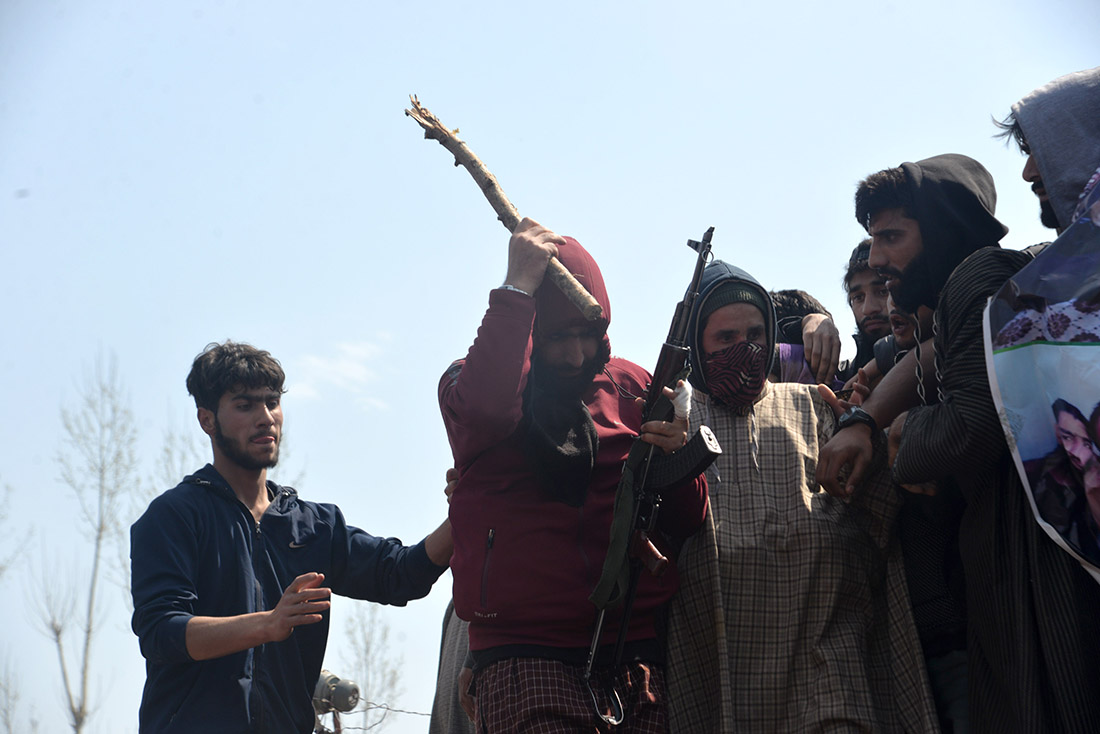 People from various areas marched towards the native places of the slain militants to participate in their funeral prayers. 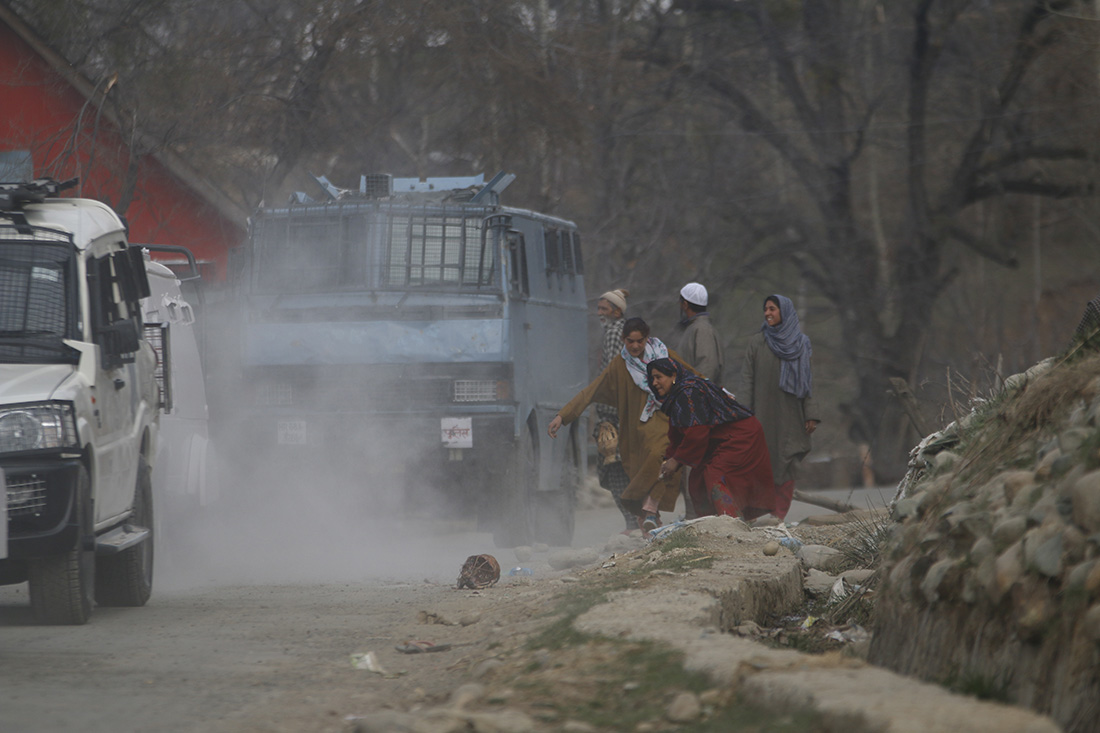 A women hurls stone at an armored vehicle during a gunfight in Southern Kashmir’s Shopian.

Amid pro-freedom slogans, the mourners carried the bodies of militants to local graveyard where funerals were held. 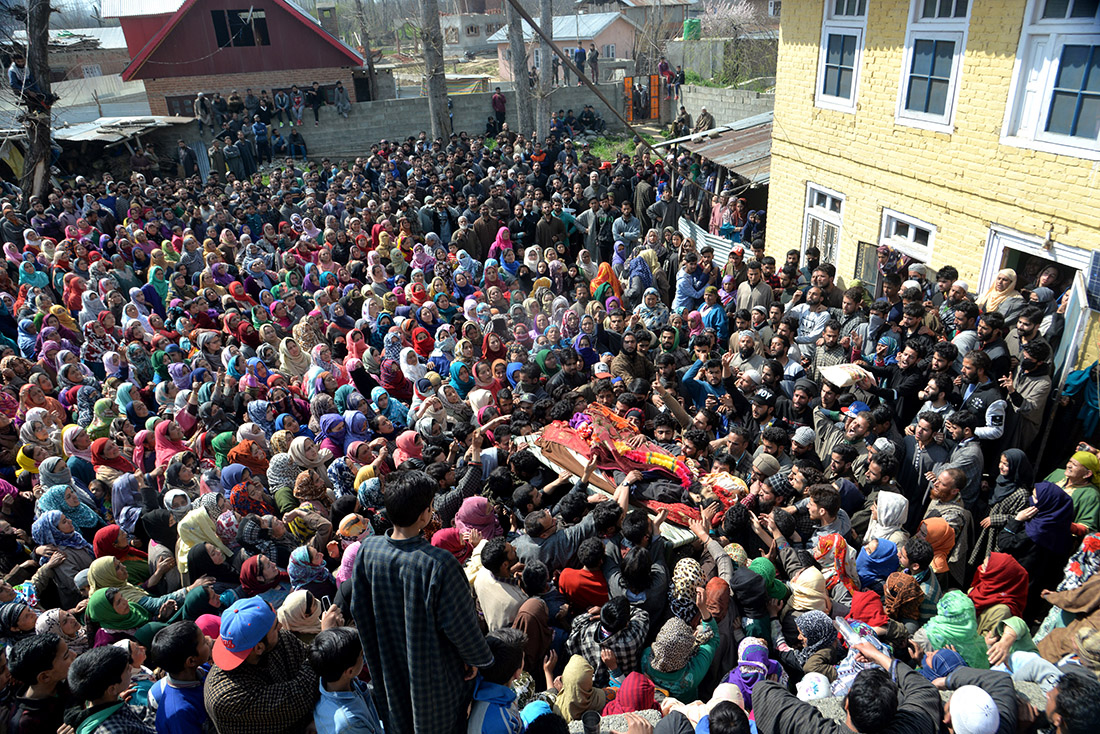 At the funeral of Basharat Ahmed Mir

Police identified the militants slain in Shopian gunfight as Sajad Khanday, Aqib Ahmad Dar and Basharat Ahmad Mir, all residents of Pulwama. “According to the police records, it was a combined group of proscribed militant outfits HM and LeT. They were wanted by law for their complicity in a series of terror crimes including an attack on security establishments and civilian atrocities,” said, a police spokesman. 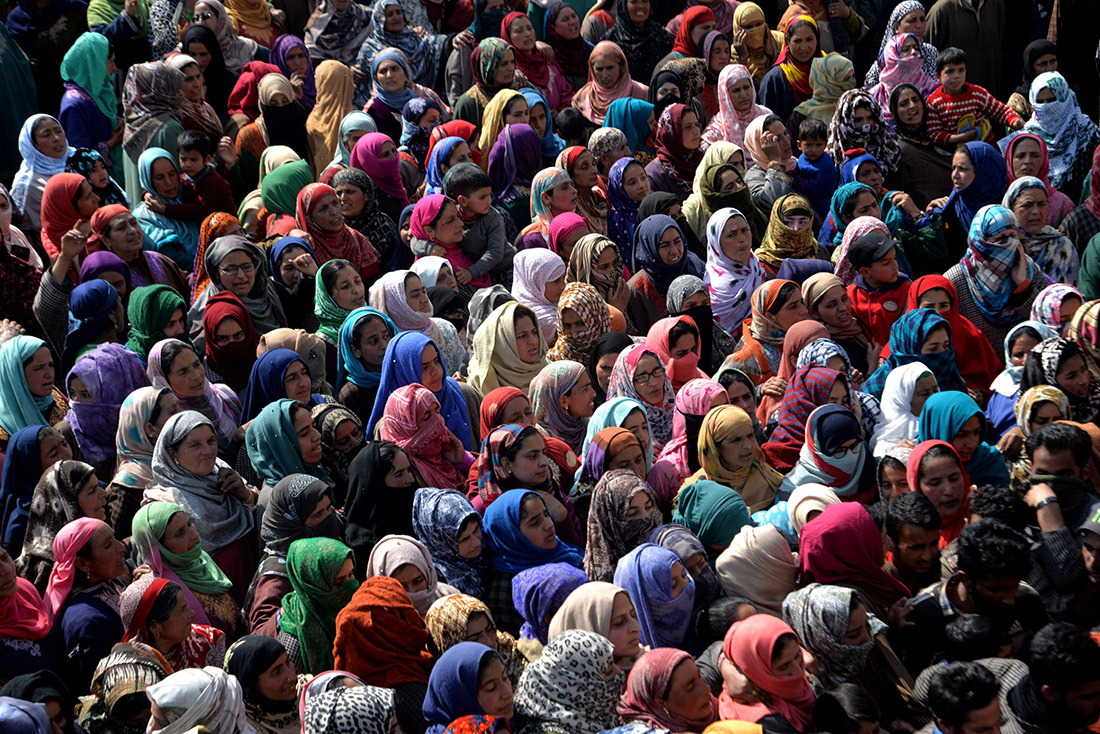 Funeral of Basharat Ahmed in Pulwama

Regarding Shopian gunfight police said based on credible inputs about the presence of militants in Yawran area of Keller in Shopian district, a cordon and search operation was launched by Police and security forces in the area. As the searches were going on, the search party was fired upon by the militants. 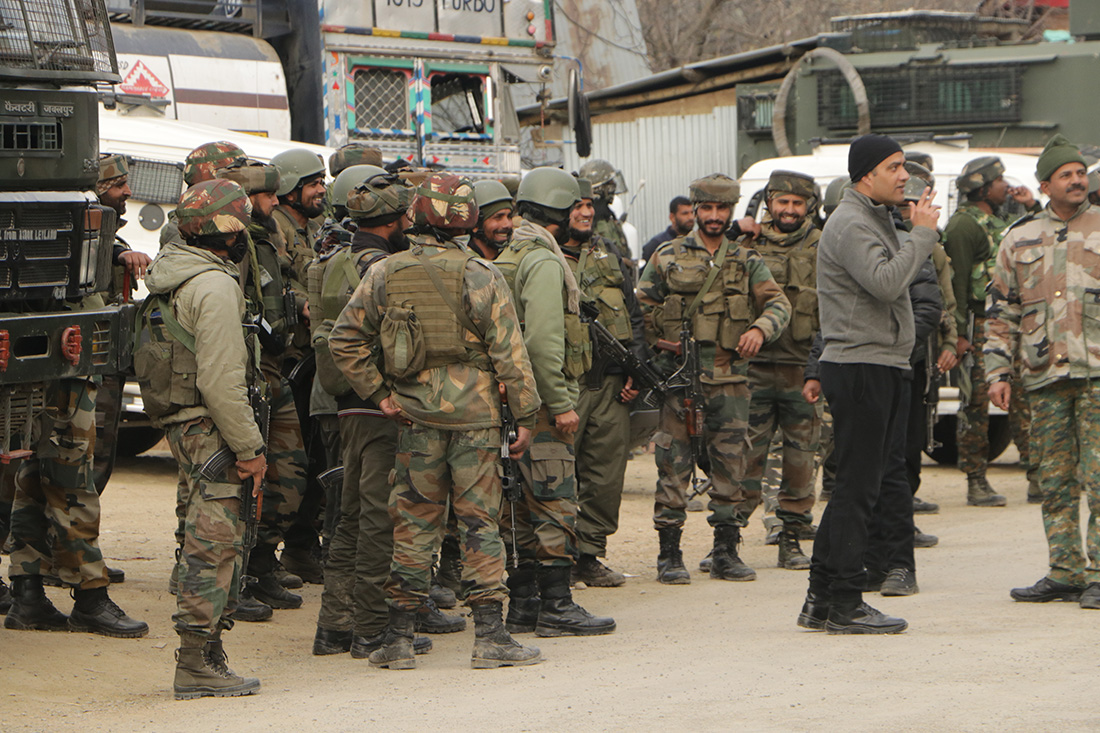 The fire was retaliated leading to a gunfight, police said. “In the ensuing encounter, 03 militants were killed and the bodies were retrieved from the site of encounter. Their identities and affiliations are being ascertained,” police said. 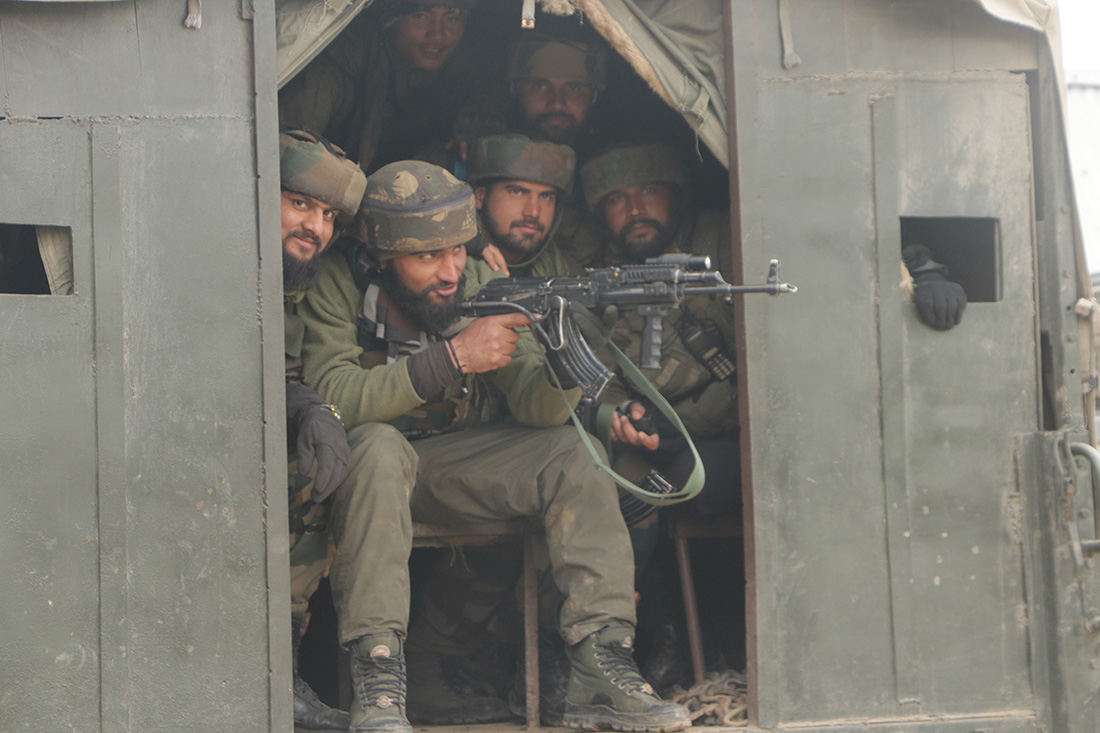 Army men at the encounter site

Police have registered a case and initiated an investigation in the matter. “Incriminating materials including 03 AK 47 rifles were recovered from the site of the encounter,” the spokesman said. 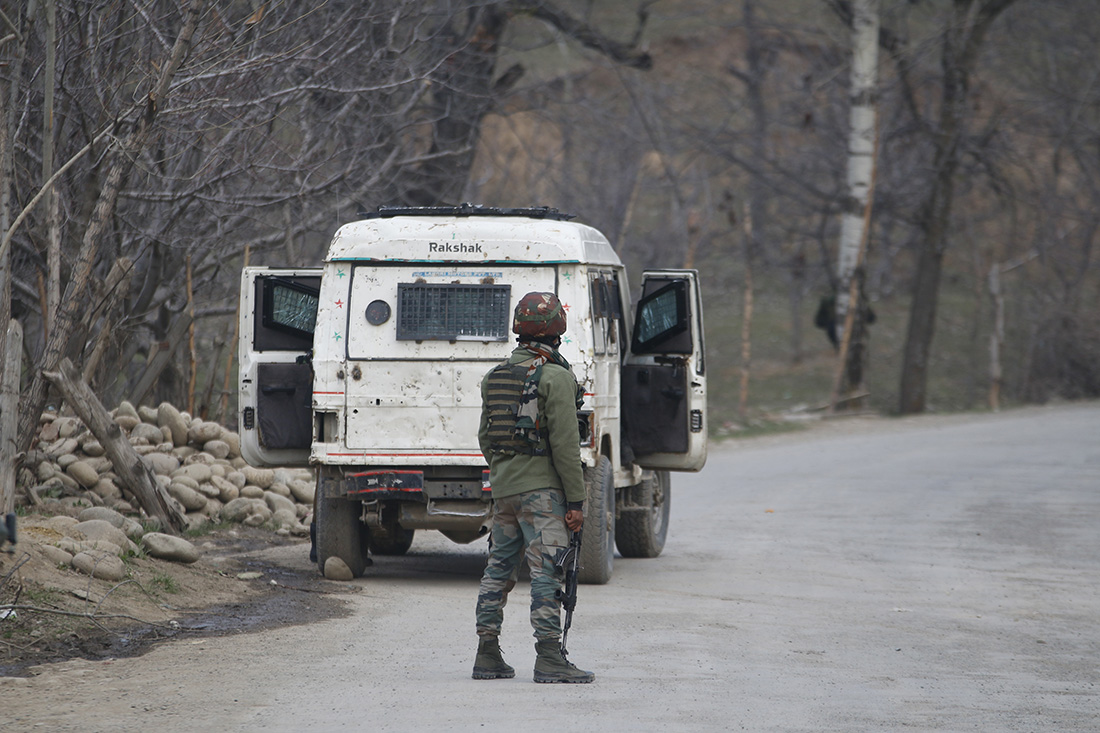 Meanwhile, the police have requested citizens not to venture inside the encounter zone since such an area can prove dangerous due to stray explosive materials.“People are requested to cooperate with police till the area is completely sanitized and cleared of all the explosives materials if any,” said, a police spokesman.

What is the Best VPN For China?