On 22 of March Hindus banged plates, clapped and rang bells and blow conch shells on the streets and in their balconies. This was in the evening, by the end of the civil curfew, but what happened in the morning is something they will be rejoiced at. Petrol bombs were hurled at Shaheenbagh’s anti-CAA protest site. A bullet was fired at Jamia Milia Islamia campus’ protest site, which was called off a day back, considering the virus outbreak. The Indian government used the opportunity of the pandemic to threaten the Muslim protesters who decided to continue protest, keeping precautions. On the contrary, it had pulled people out on to the streets on the similar day of civil curfew.

This is an absolutely illogical in its very terming itself, a performance of the Hindus which include ‘liberal’ journalists like Rajdeep Sardesai to bollywood actors, who believe they are safe in the system and protected by the system by their privileges. The frenzied appearance of middle class and upper class Hindus threatens the very existence of Muslims apparently the incident of attacks indicate.

A man spat pan on the face of a woman from Manipur while she was out to buy groceries, in the night of the curfew. Racist attacks on women from the North Eastern states, by abusing them “corona”reveals the xenophobia India wants to keep on even in the face of a pandemic.

This all happens when the Delhi pogrom survivors are open to the threat of COVID19 at Eid Gah relief camp. The women in the camp do not have enough toilet facility. There are only two toilets set up for women, one of it is not functioning. Women in the camp said they access the toilets of nearby apartments. What if anyone in the locality gets exposed to the virus, can someone from the government take the responsibility of the same? These women wants to go back to their own houses, they want their houses.

Then the government declared 144 and Delhi went into lock down.

On 24th of March in the morning, anti-CAA protest site in Shaheen Bagh was removed by Delhi police. the grafities against the brutal police repression and state atrocities on the walls of Jamia Milia Islamia University campus were erased. The protest site too is removed. What is it if this is not erasure of the markers, identifiers and visibility of Muslim’s protest against a brutal genocidal discrimination, in the name of a pandemic?

Doctors from South, North, North East and Kashmir suffer from lack of basic preventive measures. A pediatrician from Hyderabad said that he doesn’t have an N95 mask. He also said that N95 masks are not available in India and the government is not prepared with essential preventive measures. Doctors from Assam medical college are wearing plastic bags instead of masks, when doctors in other countries wear protective gears. 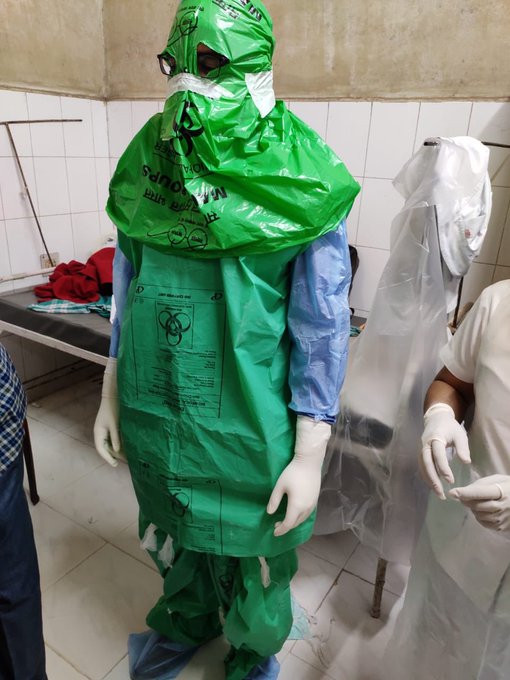 In Kashmir, forget masks, the health care system is already dilapidated, specifically after the abrogation of article 370 and the resultant lock down. Reports site that doctors there are foreseeing a medical catastrophe if community spread of COVID19 occur and says if such thing happens, people will die like animals.

AIIMS Residents Doctors Association demands the prime minister to ensure safety of doctors and other medical practitioners. Incidents of police intimidation on doctors and journalists in Hyderabad’s Begumpet, attack on doctors in Warangal where they are asked to vacate already expose the way Indian state is going to handle with the crisis.

All these shows Indian prime minister Narendra Modi right now has no moral high ground to ask its people to clap for the medical practitioners of India, since none of them are provided with even basic rights, at the outbreak of a pandemic.

There are 57 laboratories that can screen COVID19. Is that enough? When COVID19 is resisted on an organized and minute by minute basis in Kerala, many other Indian states didn’t effectively have taken the primary steps to detect and prevent the virus entering the territory from foreign travelers. According to reports there are only 40,000 ventilators in India, if a health emergency arises it will be inadequate to provide intensive care to all the needy patients.

Historical experiences of the marginalized communities and oppressed castes clearly indicate the public health system of the country is not all-inclusive, rather apathetic since the middle class and upper class people can afford high prices for health care in private hospitals. In 2017, what happened to children who are under treatment for Japanese Encephalitis in Utharpradesh Gorakhpur’s Baba Raghav Das Medical College, must be remembered now. The children from oppressed castes and classes are the ones who are vulnerable to Japanese Encephalitis. Oxygen cylinders which were in need to keep the lives of these children were out of stock, and the government authorities neglected the company’s repeated reminders for making payment dues. More than hundred children were killed the day of crisis and Dr Kafeel Ahmed Khan, who was not even on duty, had reached the hospital to save lives of few children by arranging oxygen cylinders on his own. This doctor, for being a ‘hero’ is being vindictively victimized; he is charged with NSA for a speech he made, where he is being critical about the non-secular character of the government and its apathy towards burning issues, in the light of its imposition of Citizenship Amendment Act.

Dr Kafeel’s case visibly express how the communal government made him go through years long punishment, with a double suspension, even when the court proved him innocent, only because through his action got exposed the worst juncture a government hospital can be in.

When in the lock down do all the citizens get to quarantine? Quarantine is only possible for people who belong to certain classes and castes. The working class are yet to be assured with the facility of quarantine. It is a question that the citizens must ask when the state is not bothered about providing welfare measures in such situations. It has become quite evident that for the current government what matters most is not the value of each and every citizen but the value of citizen counted by their religion.

The Janta Curfew began with petrol bomb attacks on the anti-CAA protest site at Shaheenbagh, where country’s eldest of Muslim women protest on the consequent 99th day. Petrol bombs were hurled at the protest site in the morning, since the site was deserted nobody is injured. Firing happened at Jamia gate, though the Jamia Milia Islamia’s student protesters had called off the protest considering the virus outbreak. Protesters at Shaheenbagh were keeping preventive measures like physical distancing and sanitizing. They said they are scared of the discriminatory and genocidal law more than of COVID 19. On March 16th Shaheenbagh protesters were asked to limit their numbers to fifty. Mehrunnisa, a protester who covered 80 days asks “are’t there more than fifty chairs in the parliament?”

Advocate Ashutosh Dubey filed a PIL against Shaheen Bagh protesters siting insecurity in preventing the virus. But the women decided to continue fighting saying that they want the government to withdraw this act. By Janta curfew’s plate bangings and enmasse celebrations it is quite evident that the problem for the government was not concern over COVID19, but the physical visibility of Muslims protesting against CAA on the national highway in the capital city. Meanwhile, one of the key organizers of Shaheen Bagh road blockade is on his 58th day of imprisonment, charged with UAPA and sedition for an unapologetic speech he made.

How did the PM do it? First he asked for ideas and innovations from people when all other countries which were hit by the pandemic started saving the lives of their citizens at the maximum with all available resources, tirelessly. The ministry of health and family welfare issued a notice where it welcomed suggestions and innovative ideas to fight COVID19 and offered one lakh for the selected best suggestion. In the comment section citizens demanded essential masks.

In the world map, India literally look like that one match stick that skip away from fire to ‘break the chain’, it means exactly the opposite in India’s case. No comparisons can be drawn with India and any other countries in this case since Indian government has certain unique features; caste and Hinduism is very much part of the system. India does not have a rationale and a state that upholds scientific temper, instead India has a feudal hierarchy mindset that believes chanting a mantra against Corona or drinking gowmutra will help. It is the worst that can happen to a country, with worrying imbalances in social and economic privileges and communal bigotry suggests the illegalizing of citizenship of a minority community. The apathy shown in such dealings are not just worrying, but are signaling to a critical point where an utterly disoriented health emergency is on the way.

Complete lock down for twenty one days

Prime Minister Narendra Modi in his address announced that from twelve pm tonight the entire nation goes into lock down for twenty one days. No detail about facilities for safe quarantine period for all not specified in the address. Demands for the same were being raised for past few days since the reported numbers of COVID19 cases went up. Different organizations, journalists and concerned citizens are raising voice for these demands.